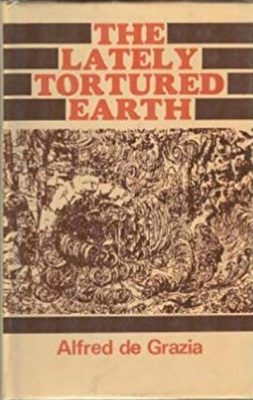 The Lately Tortured Earth: Exoterrestrial Forces and Quantavolutions in the Earth Sciences (1983) is a book by Alfred de Grazia. He writes:

“Because catastrophism is a word that excites emotion and connotes only destruction, the present work and the series to which it belongs prefers the more general idea implied in the word quantavolution. The concept allows a more peaceful invasion of the realms of gradualism, uniformitarianism, evolution, and anthropology.

“I do not mean this book to be violent and bloodcurdling. We have far too much of such stimulus today on television, in movies and in other books and magazines. I even go so far as to say that the Earth system has been settling down – this without conclusive evidence. But facts must be faced. The Earth has been severely traumatized in the memory of mankind”.[1]Alfred de Grazia, The Lately Tortured Earth, (1983) Metron Publications, USA