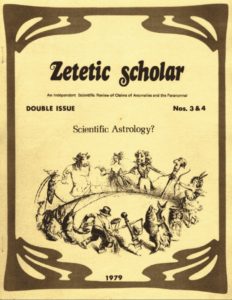 Marcello Truzzi founded the Zetetic Scholar journal, in which he popularised the term pseudoskepticism in the mid 1980s

The terms pseudoskepticism (sometimes pseudo-skepticism) and pathological skepticism are used to denote the phenomena when certain forms of skepticism deviate from objectivity. The term has been in limited use in philosophy for more than a century, but has only recently been the object of more systematic attempts at defining the concept. The most well known analysis of the term has been conducted by Marcello Truzzi, who in 1987 stated that:

Since “skepticism” properly refers to doubt rather than denial — nonbelief rather than belief — critics who take the negative rather than an agnostic position but still call themselves “skeptics” are actually pseudo-skeptics.[1]”Marcello Truzzi, On Pseudo-Skepticism” Zetetic Scholar (1987) No. 12/13, 3-4.

The first extensive analysis of the term pseudoskepticism was conducted by Marcello Truzzi, Professor of Sociology at Eastern Michigan University, who in 1987 claimed that

A Spring 2006 course at the University of Colorado, “Edges of Science” which “Examines the evidence for paranormal phenomena, [and] reasons for skepticism”, includes a section which shows “how a healthy skepticism can see through unsupported assertions, and how pathological skepticism can work against honest scientific inquiry.” [14]http://ece-www.colorado.edu/~ecen3070/3070Syllabus.html ECEN 3070 – “Edges of Science”, Spring Semester Spring 2006

The Laboratory for Advances in Consciousness and Health at the University of Arizona, run by Prof. Gary Schwartz, claims to provide “a responsible forum in which to conduct systematic research on pathological skepticism, illusory correlates, and self-deception in science, society, and human relationships.”[15]Human Energy Systems Laboratory, University of Arizona The lab’s research into “the role of conscious intention in energy medicine and healing, and the possibility of survival of consciousness after physical death” has been criticized in The Skeptical Inquirer because it did not consider non-paranormal explainations for the observations recorded.[16]http://www.csicop.org/si/2003-01/medium.html “How Not to Test Mediums: Critiquing the Afterlife Experiments”.

The term “pseudo-skepticism” appears to have its origins with 19th and early 20th century philosophy.

On 31 Aug 1869, Swiss philosopher Henri-Frédéric Amiel wrote in his diary:

“My instinct is in harmony with the pessimism of Buddha and of Schopenhauer. It is a doubt which never leaves me, even in my moments of religious fervor. Nature is indeed for me a Maïa; and I look at her, as it were, with the eyes of an artist. My intelligence remains skeptical. What, then, do I believe in? I do not know. And what is it I hope for? It would be difficult to say. Folly! I believe in goodness, and I hope that good will prevail. Deep within this ironical and disappointed being of mine there is a child hidden — a frank, sad, simple creature, who believes in the ideal, in love, in holiness, and all heavenly superstitions. A whole millennium of idyls sleeps in my heart; I am a pseudo-skeptic, a pseudo-scoffer.”[17]Charles Dudley Warner, Editor, ”Library Of The World’s Best Literature Ancient And Modern, Vol. II”, 1896. Online at Project Gutenberg (eg. here)

“Strauss had been a preacher but had renounced the cloth and set up shop as a critic of Christianity. He had labored with good intentions, no doubt, but the net result of all his smug agnosticism was that his disciplines were as self-satisfied, bigoted, and prejudiced in the garb of agnostics as they had been before Christians. Nietzsche’s eye saw this and in the first of his little pamphlets “David Strauss, der Bekenner und der Schriftsteller” (“David Strauss, the Confessor and the Writer”), he bore down on Strauss’s bourgeoise pseudo-skepticism most savagely. This was 1873″.[18]H. L. (Henry Louis) Mencken, The Philosophy of Friedrich Nietzsche (1908) publ. T.F. Unwin. Reprinted in Friedrich Nietzsche, Originally published: Boston : Luce and Co., 1913. p.30.

Professor of Philosophy at the University of Illinois, Frederick L. Will used the term “pseudo-skepticism” in 1942. Alasdair MacIntyre writes:

[Frederick] Will was no exception. He began as an analytical philosopher, distinguishing different uses of language with the aim of showing that certain traditional philosophical problems need no longer trouble us, once we have understood how to make the relevant linguistic distinctions. The enemies were two: the philosophical skeptic who poses these false problems and the philosopher who thinks that the skeptic needs to be answered. So in “Is there a Problem of Induction?” (Journal of Philosophy, 1942) it is two senses of “know” that are to be distinguished: “All the uneasiness, the pseudo-skepticism and the pseudo-problem of induction, would never appear if it were possible to keep clear that ‘know’ in the statement that we do not know statements about the future is employed in a very special sense, not at all its ordinary one”.[19]Alasdair MacIntyre “http://www.uea.ac.uk/~j018/FLW-P&R.htm Foreword” to the book Pragmatism and Realism by Frederick L. Will (1997) quoting his earlier paper “Is There a Problem of Induction?” Journal of Philosophy, Vol. 39, No. 19 (Sep. 10, 1942), pp. 505-513

The term pseudoskepticism was popularised and characterised by Truzzi in 1987, in response to theskeptic groups who applied the label of “pseudoscientists” to fields which Truzzi thought might be better described as protoscience.[21]Truzzi, ibid, “A characteristic of many scoffers is their pejorative characterization of proponents as ‘promoters’ and sometimes even the most protoscientific anomaly claimants are labelled as “pseudoscientists” or practitioners of ‘pathological science.’ “

Science writer C. Eugene Emery, Jr. compared the degrees of skepticism of CD-ROM-based encyclopedias of articles on pseudoscientific subjects. He called such articles “pseudoskeptical” if only suggested or stated that the subject was “controversial, but the author may not have a clue as to why”. [22]C. Eugene Emery, Jr., “CD-ROM encyclopedias: how does their coverage of pseudoscience topics rate?“, Skeptical Inquirer, Nov-Dec, 1996