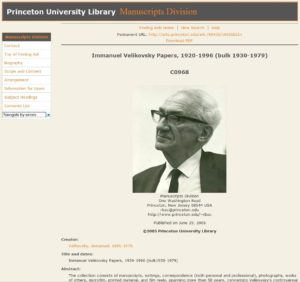 The Immanuel Velikovsky Papers 1920-1996 (bulk 1930-1979) located at the Department of Rare Books and Special Collections in Princeton University Library, is described thus:

“The collection consists of manuscripts, writings, correspondence (both personal and professional), photographs, works of others, microfilm, printed material, and film reels, spanning more than 50 years, concerning Velikovsky’s controversial ideas, the books that he wrote, and the history of opposition and criticism from the academic community that he received following the publication of his first book, Worlds in Collision, in 1950. Colleges and universities threatened to boycott the textbook division of the publisher, Macmillan & Co., which led to the transfer of the publishing rights to Doubleday & Co., even though the book had reached the number one spot on the best-sellers list. The book was eventually banned from a number of academic institutions, and several people lost their jobs because of it.”