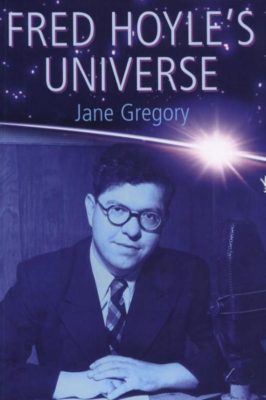 Sir Fred Hoyle FRS (24 June, 1915 – 20 August, 2001) was an English astronomer who had met Immanuel Velikovsky at Princeton University, and whose theories, some have compared aspects to Velikovsky’s.

“During my stay in Princeton, Velikovsky attended the weekly astronomy seminars, whether to learn something of astronomy itself or to learn what made astronomers tick, I never really discovered. Perhaps because I couldn’t see what the fuss was about, and so was calm about it, Velikovsky used to come to talk at the tea intervals that preceded the seminars. I managed to convey to him that our ground rules were different from his. He believed in the primacy of documentary evidence, whereas we believed in the primacy of mathematical rules, rules that enabled us to predict, with a high degree of accuracy, where and when the next total eclipse of the Sun was going to occur. This made Velikovsky look sad, which is how we parted.

“It must have occurred to me that the intensity of the fuss was peculiar. After all, the world is full of crazy notions, notions the public keep on buying, as Barnum’s remark about a sucker being born every minute makes dear. I suppose I passed the situation off with the thought that Americans are highly emotional people, which, in some degree, is true. But is it sufficiently true to explain why Harlow Shapley, a most distinguished astronomer, was prepared to parade himself on the national stage over what was claimed to be nothing but claptrap? Or could it be that Velikovsky had revealed, admittedly in a form that was scientifically unacceptable, a situation that astronomers are under a cultural imperative to hide? Could it be that, somewhere in the shadows, there is a past history that it is inadmissible to discuss?”[1]Fred Hoyle, Home is where the wind blows: chapters from a cosmologist’s life, published by University Science Books, 1994, ISBN 093570227X, 443 pages (page 285-286)

In her biography of Fred Hoyle, Jane Gregory writes:

“Another echo of Hoyle’s time at Princeton was captured in a little book called The Origin of the Universe and the Origin of Religion,[2]Fred Hoyle, The Origin of the Universe and the Origin of Religion, Published by Moyer Bell, 1994, ISBN 1559210834, 96 pages. Online at Scribd.com the text of a lecture Hoyle gave in New York in 1993. He proposed a thesis reminiscent of the one described in 1950 by Immanuel Velikovsky in his controversial book Worlds in Collision, where earthly disasters, such as those described in the Old Testament and other scriptures, were caused by astronomical phenomena. At Princeton in 1953, a sceptical Hoyle had advised Velikovsky, who was attending astronomy seminars there, that in astronomy, mathematics matters more than scriptures. Now though, astronomers Victor Clube and Bill Napier of Edinburgh University had suggested that Earth had periodically been showered by fragments of a giant comet. So Hoyle had scientific grounds for believing that such astronomical events, which might well have been accompanied by lights in the sky or other unusual sights in the heavens, could have been the trigger for events on Earth that disrupted and reshaped civilizations and led to beliefs in a higher power. Hoyle ended his lecture on an upbeat note, however: he remarked that our understanding of this situation had come just about in time for us to prepare to fend off the next visit, around 2100, from Clube and Napier’s giant comet.”[3]Jane Gregory, Fred Hoyle’s Universe, published by Oxford University Press, 2005, ISBN 0198507917, 406 pages (page 334-335)

“It is perhaps worth noting that in 1955 Hoyle suggested, as Velikovsky already had, that Venus is covered with oceans of petroleum and its atmosphere is clouded by hydrocarbon droplets; and that in the late 1970s he would begin propagating his theory that micro-organic life was brought to Earth by comets — a proposition that closely resembled Velikovsky’s assertion that the Venus comet had brought disease-bearing micro-organisms in its wake.”[4]Duane Vorhees, “”Worlds in Collision”: Reviews and Reviewers”, Aeon III:6 (Dec 1994)

Prof. Stephen Senn of the University of Glasgow writes:

“Although Velikovsky and Hoyle and Wickramasinghe have mounted very different attacks on accepted cosmology, in particular the inspiration for the two theories (historical in the case of Velikovsky and astronomical for Hoyle and Wickramasinghe) is quite different, the theories have curious similarities. Both of these extraordinary cosmologies attack accepted theories of evolution and paleontology, bothaccept the possibility of extra-terrestrial life (although this has differing degrees of importance for the two theories), both have led the authors to make successful predictions about other members of the solar system (Venus, Jupiter and the moon in the case of Velikovsky, Halley’s comet in the case of Hoyle and Wickramasinghe), and both sets of authors have found their predictions explained away after they have been fulfilled [10]Talbot, S (editor) Velikosky Reconsidered, Abacus, London, 1978.[11]Maddox, J., “When Reference means Deference”, Nature, 321, 723, (1986). A final irony, which would not, however, surprise Immanuel Velikovsky, is that there is no reference to his work in Diseases from Space.”[12]S.J. Senn, “Comets, Contagion and Contingency“, Presented at Innsbruck 1988 to the International Society of Clinical Biostatistics (Minor revisions Dec 2004) Online at Stephen Senn’s own web site