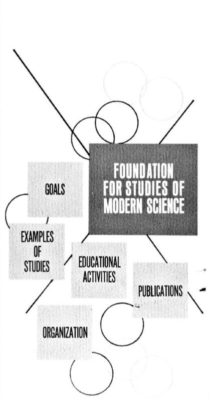 “.. a week ago, I thought “We must start a foundation for Velikovsky and his work.” I asked Richard Kramer to initiate the papers for organization of a corporation not-for profit in N.J… settled on PO Box 294 and my home as the address, and decided to ask [Ralph] Juergens, [Livio] Stecchini, [Richard P.] Kramer, and Herb Neuman to join me in the first Board of Directors. I called each man to invite them aboard and received their prompt acceptances.”[3]Alfred de Grazia, Cosmic Heretics, Metron Publications, page 276

In the early 1970s, the personnel included: [4]Foundation for Studies of Modern Science, Inc, Certification of Incorporation, 29th Jan 1968

Officers of the Board

“Velikovsky insists, at the very least, that literature sent out make absolutely clear to the reader that he is not the power behind the foundation and that he will not be a recipient, direct or indirect, of any funds collected by the foundation.(…)

It seems to me… that some rather fundamental misunderstandings remain to be cleared up, not only between Dr. Velikovsky and the Board of Directors, but perhaps also among members of the Board. In the first place, there is confusion as to the purposes of the foundation. It may be that Dr. Velikovsky has never seen a copy of our by-laws, which seem to make the point that the foundation is to serve as a clearinghouse for a variety of information, not all of it necessarily related in any obvious way to Dr. Velikovsky’s work. This would appear to leave us free to tread ways not yet probed by the Doctor. And of course we thus face the danger of becoming what Dr. Velikovsky would call a clearinghouse for cranks. But our statement of purpose at least broadens our horizons to the extent that we cannot think of our organization as a ‘Velikovsky’ foundation.”