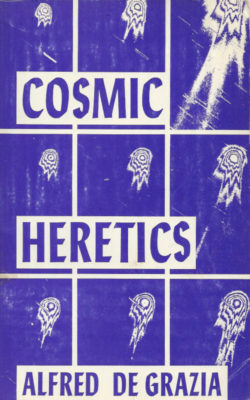 Cosmic Heretics: A Personal History of Attempts to Establish and Resist Theories of Quantavolution and Catastrophe in the Natural and Human Sciences, 1963 to 1983 (1984) is a book by Alfred de Grazia. Writing in the third person about himself and the book, and using “Deg” to refer to himself, de Grazia writes:

“I’ll start, I said, at the time when you met Immanuel Velikovsky, the beginning of 1963, and carry it down to the publication of your Quantavolution Series, that is, the beginning of 1984. Not in chronological order of course. The story will lurch from side to side and pitch and roll.

“Using your iconoclastic word “quantavolution” will help to define the dramatis personae. If a person’s been observed by you amidst the melee provoked by the claim that nature and mankind have been fashioned by disaster, then that person belongs to the cast of characters.

“Deg told me that the cosmic heretics were many, and their number would grow with the acceptance of the heresy. But, he warned me, if the heresy were to fail, I would be guilty of slandering decent citizens by inclusion. In either event, he said, history will be rewritten; it always is.”[1]Alfred de Grazia, Cosmic Heretics (1984) Metron Publications, USA. ISBN 0-940268-08-6.